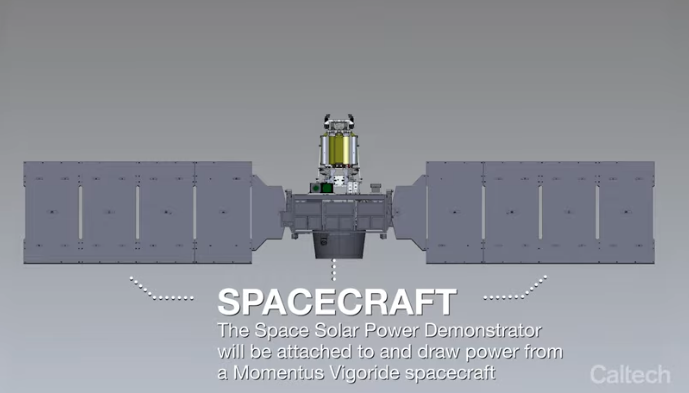 Harvesting solar power in space and wirelessly supplying the energy back to Earth is more challenging than it sounds, yet a team of Caltech researchers is one step closer to making it happen. On January 3 they launched their Momentus Vigoride spacecraft on the Transporter 6 mission from a SpaceX rocket. The technology will gather the information that will enable them to develop panels and materials that can orbit in outer space and transmit electricity back to Earth.

The device, aka the Space Solar Power Demonstrator (SSPD), is expected to begin returning data to Earth in the next few weeks. The vision began over 12 years ago when Donald Bren, a California native and successful, multi-billionaire and philanthropist fervently embraced the idea after reading about it in an issue of Popular Science magazine. By 2013 he and his wife made the financial donation to Caltech to bring the project to life. If all goes accordingly, this will provide an infinite supply of clean solar power to the world.

Looking back at the now seminal Popular Science article from 2011, it explains the vision behind this phenomenal project. The author, Corey Binns covered it under the topic Environment and not Energy, which is interesting. In the article he writes; “A 2007 study by the National Space Society estimates that a half-mile-wide band of photovoltaics in geosynchronous orbit with Earth could generate the energy equivalent of all the oil remaining on the planet over the course of one year.” It seems the author was placing concern on potential environmental damage this clean and renewable energy source could cause. At AGREEN1, we like that because it demonstrates a balance of forward-leaning innovation coupled with responsibility for Earth and all its inhabitants.

Solar collectors such as photovoltaic cells would collect the solar energy and that solar energy would be transmitted to the Earth via infrared laser beam. According to physicist Prof. Stephen Sweeney of the University of Surrey in the UK, such activity would not make the planet hotter, and the laser beams would not incinerate any living creatures in its path.

On the launch day Bren said: “For many years, I’ve dreamed about how space-based solar power could solve some of humanity’s most urgent challenges. Today, I’m thrilled to be supporting Caltech’s brilliant scientists as they race to make that dream a reality.” Tap here for a live version of Lou Reed singing Satellite of Love.

I Have a Dream